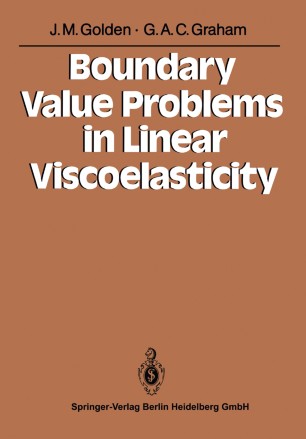 The classical theories of Linear Elasticity and Newtonian Fluids, though trium­ phantly elegant as mathematical structures, do not adequately describe the defor­ mation and flow of most real materials. Attempts to characterize the behaviour of real materials under the action of external forces gave rise to the science of Rheology. Early rheological studies isolated the phenomena now labelled as viscoelastic. Weber (1835, 1841), researching the behaviour of silk threats under load, noted an instantaneous extension, followed by a further extension over a long period of time. On removal of the load, the original length was eventually recovered. He also deduced that the phenomena of stress relaxation and damping of vibrations should occur. Later investigators showed that similar effects may be observed in other materials. The German school referred to these as "Elastische Nachwirkung" or "the elastic aftereffect" while the British school, including Lord Kelvin, spoke ofthe "viscosityofsolids". The universal adoption of the term "Viscoelasticity", intended to convey behaviour combining proper­ ties both of a viscous liquid and an elastic solid, is of recent origin, not being used for example by Love (1934), though Alfrey (1948) uses it in the context of polymers. The earliest attempts at mathematically modelling viscoelastic behaviour were those of Maxwell (1867) (actually in the context of his work on gases; he used this model for calculating the viscosity of a gas) and Meyer (1874).