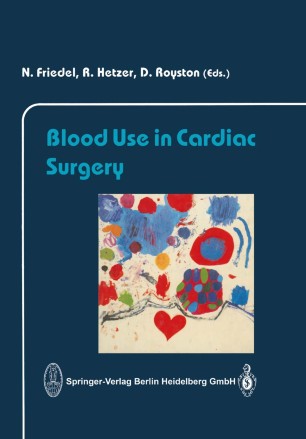 Blood Use in Cardiac Surgery

Cardiac surgery has developed dramatically since the first open-he art operations were performed in the mid 1950s. Although the improvement of surgical technique, extracorporeal circulation, and postoperative management has contributed to a marked reduction of morbidity and mortality, the development of cardiac surgery to its present state would not have been possible without blood substitution by homologous donor blood. Only 20 years ago, open-heart operations required an average of 8 units of blood preserves. The excessive need of donor blood in those early days was mainly due to premature surgical technique, insecure control of anticoagulation, severe blood trauma by extracorporeal circulation, and the lack of retransfusion technologies that would have allowed the reuse of shed mediastinal blood. The introduction of new technologies, such as normovolemic hemodilution, in­ traoperative autotransfusion, postoperative return of shed mediastinal blood, and predonation of autologous blood has greatly reduced donor blood requirements. At present the majority of routine coronary artery surgical procedures can be performed without any blood transfusion. Blood loss, however, may be considerable in patients undergoing complex valve surgery or reoperations, as they often require several units of transfused blood. Blood conservation has now become an area of major interest for the cardiac surgeon. This increased concern is caused by infectious complications of blood transfusion, in particular hepatitis and, more recently, AIDS.