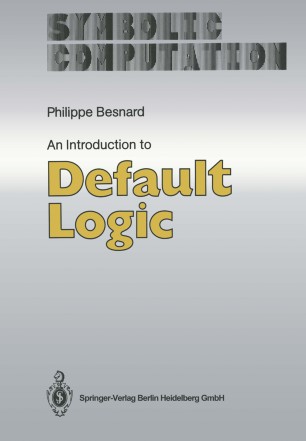 An Introduction to Default Logic

This book is written for those who are interested in a fonnalization of human reasoning, especially in order to build "intelligent" computer systems. Thus, it is mainly designed for the Artificial Intelligence community, both students and researchers, although it can be useful for people working in related fields like cognitive psychology. The major theme is not Artificial Intelligence applications, although these are discussed throughout in sketch fonn. Rather, the book places a heavy emphasis on the fonnal development of default logic, results and problems. Default logic provides a fonnalism for an important part of human reasoning. Default logic is specifically concerned with common sense reasoning, which has recently been recognized in the Artificial Intelligence literature to be of fundamental importance for knowledge representation. Previously, fonnalized reasoning systems failed in real world environments, though succeeding with an acceptable ratio in well-defined environments. This situation enabled empirical explorations and the design of systems without theoretical justification. In particular, they could not be compared since there was no basis to judge their respective merits. Default logic turned out to be very fruitful by proving the correctness of some of them. We hope that this book will initiate other successful developments in default logic.