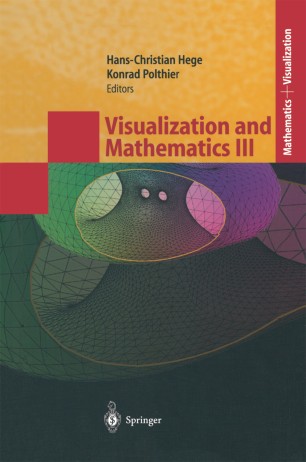 Mathematical Visualization aims at an abstract framework for fundamen­ tal objects appearing in visualization and at the application of the manifold visualization techniques to problems in geometry, topology and numerical mathematics. The articles in this volume report on new research results in this field, on the development of software and educational material and on mathematical applications. The book grew out of the third international workshop "Visualization and Mathematics", which was held from May 22-25, 2002 in Berlin (Germany). The workshop was funded by the DFG-Sonderforschungsbereich 288 "Dif­ ferential Geometry and Quantum Physics" at Technische Universitat Berlin and supported by the Zuse Institute Berlin (ZIB) and the DFG research cen­ ter "Mathematics for Key Technologies" (FZT 86) in Berlin. Five keynote lectures, eight invited presentations and several contributed talks created a stimulating atmosphere with many scientific discussions. The themes of this book cover important recent developments in the fol­ lowing fields: - Geometry and Combinatorics of Meshes - Discrete Vector Fields and Topology - Geometric Modelling - Image Based Visualization - Software Environments and Applications - Education and Communication We hope that the research articles of this book will stimulate the readers' own work and will further strenghten the development of the field of Mathe­ matical Visualization. VI Preface We appreciate the thorough work of the authors and reviewers on each of the individual articles, and we thank you all.