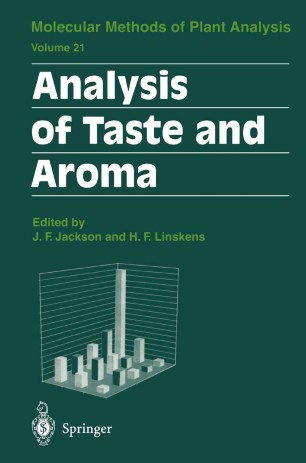 Analysis of Taste and Aroma

Molecular Methods of Plant Analysis Concept of the Series The powerful recombinant DNA technology and related developments have had an enormous impact on molecular biology. Any treatment of plant analysis must make use of these new methods. Developments have been so fast and the methods so powerful that the editors of Modern Methods of Plant Analysis have now decided to rename the series Molecular Methods ofPlant Analysis. This will not change the general aims of the series, but best describes the thrust and content of the series as we go forward into the new millennium. This does not mean that all chapters a priori deal only with the methods of molecular biology,but rather that these methods are to be found in many chapters together with the more traditional methods of analysis which have seen recent advances. The numbering of the volumes of the series therefore continues on from 20, which is the most recently published volume under the title Modern Methods ofPlant Analysis. As indicated for previous volumes, the methods to be found in Molecular Methods ofPlantAnalysis are described critically,with hints as to their limitations, references to original papers and authors being given, and the chapters written so that there is little need to consult other texts to carry out the methods of analysis described. All authors have been chosen because of their special experience in handling plant material and/or their expertise with the methods described.