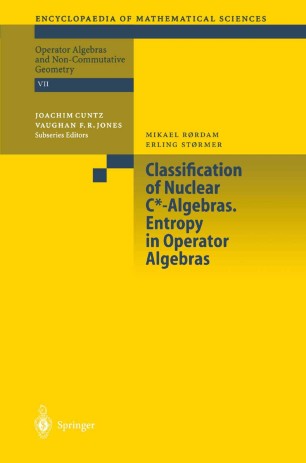 This EMS volume consists of two parts, written by leading scientists in the field of operator algebras and non-commutative geometry. The first part, written by M.Rordam entitled "Classification of Nuclear, Simple C*-Algebras" is on Elliotts classification program. The emphasis is on the classification by Kirchberg and Phillips of Kirchberg algebras: purely infinite, simple, nuclear separable C*-algebras. This classification result is described almost with full proofs starting from Kirchbergs tensor product theorems and Kirchbergs embedding theorem for exact C*-algebras. The classificatin of finite simple C*-algebras starting with AF-algebras, and continuing with AF- and AH-algberas) is covered, but mostly without proofs. The second part, written by E.Stormer entitled "A Survey of Noncommutative Dynamical Entropy" is a survey of the theory of noncommutative entropy of automorphisms of C*-algebras and von Neumann algebras from its initiation by Connes and Stormer in 1975 till 2001. The main definitions and resuls are discussed and illustrated with the key examples in the theory. This book will be useful to graduate students and researchers in the field of operator algebras and related areas.