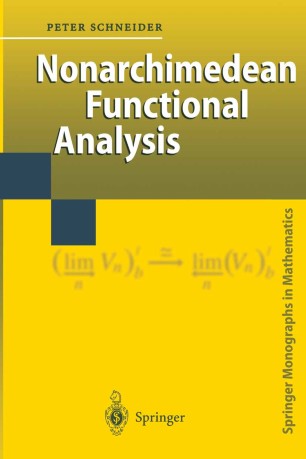 This book grew out of a course which I gave during the winter term 1997/98 at the Universitat Munster. The course covered the material which here is presented in the first three chapters. The fourth more advanced chapter was added to give the reader a rather complete tour through all the important aspects of the theory of locally convex vector spaces over nonarchimedean fields. There is one serious restriction, though, which seemed inevitable to me in the interest of a clear presentation. In its deeper aspects the theory depends very much on the field being spherically complete or not. To give a drastic example, if the field is not spherically complete then there exist nonzero locally convex vector spaces which do not have a single nonzero continuous linear form. Although much progress has been made to overcome this problem a really nice and complete theory which to a large extent is analogous to classical functional analysis can only exist over spherically complete field8. I therefore allowed myself to restrict to this case whenever a conceptual clarity resulted. Although I hope that thi8 text will also be useful to the experts as a reference my own motivation for giving that course and writing this book was different. I had the reader in mind who wants to use locally convex vector spaces in the applications and needs a text to quickly gra8p this theory.