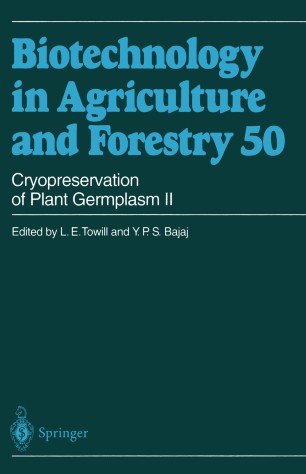 Part of the Biotechnology in Agriculture and Forestry book series (AGRICULTURE, volume 50)

Ex situ preservation of germplasm for higher plant species has been accom­ plished using either seeds or clones, but storage of these under typical condi­ tions does not provide the extreme longevities that are needed to minimize risk of loss. Costs of maintenance and regeneration of stocks are also high. Systems that provide virtually indefinite storage should supplement existing methods and it is within this context that cryopreservation is presented. The use of low temperature preservation was initially more a concern of medicine and animal breeding, and was expanded to plants in the 1970s. Sur­ vival after cryogenic exposure has now been demonstrated for diverse plant groups including algae, bryophytes, fungi and higher plants. If survival is com­ monplace, then the eventual application is a cryopreservation system, whereby cells, tissues and organs are held indefinitely for use, often in the unforeseen future. The increasing interest and capabilities for application could not have occurred at a more opportune time since expanding human populations have placed unprecedented pressures on plant diversity. This book emphasizes cry­ opreservation of higher plants and was initially driven by the concern for loss of diversity in crops and the recognized need that this diversity would be essential for continued improvement of the many plants used by society for food, health and shelter. The interest in cryopreservation has been expanded by conservationists and their concerns for retaining, as much as possible, the diversity of natural populations. The need for cryopreservation, thus, is well established.