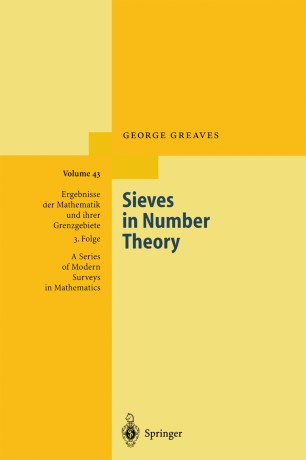 Slightly more than 25 years ago, the first text devoted entirely to sieve meth­ ods made its appearance, rapidly to become a standard source and reference in the subject. The book of H. Halberstam and H.-E. Richert had actually been conceived in the mid-1960's. The initial stimulus had been provided by the paper of W. B. Jurkat and Richert, which determined the sifting limit for the linear sieve, using a combination of the ,A2 method of A. Selberg with combinatorial ideas which were in themselves of great importance and in­ terest. One of the declared objectives in writing their book was to place on record the sharpest form of what they called Selberg sieve theory available at the time. At the same time combinatorial methods were not neglected, and Halber­ stam and Richert included an account of the purely combinatorial method of Brun, which they believed to be worthy of further examination. Necessar­ ily they included only a briefer mention of the development of these ideas due (independently) to J. B. Rosser and H. Iwaniec that became generally available around 1971. These combinatorial notions have played a central part in subsequent developments, most notably in the papers of Iwaniec, and a further account may be thought to be timely. There have also been some developments in the theory of the so-called sieve with weights, and an account of these will also be included in this book.