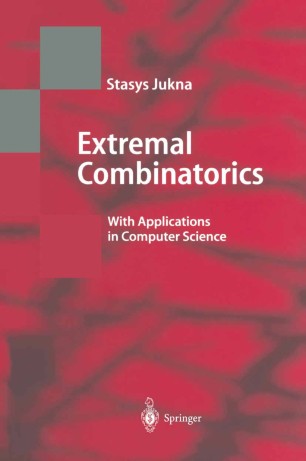 With Applications in Computer Science

Combinatorial mathematics has been pursued since time immemorial, and at a reasonable scientific level at least since Leonhard Euler (1707-1783). It ren­ dered many services to both pure and applied mathematics. Then along came the prince of computer science with its many mathematical problems and needs - and it was combinatorics that best fitted the glass slipper held out. Moreover, it has been gradually more and more realized that combinatorics has all sorts of deep connections with "mainstream areas" of mathematics, such as algebra, geometry and probability. This is why combinatorics is now apart of the standard mathematics and computer science curriculum. This book is as an introduction to extremal combinatorics - a field of com­ binatorial mathematics which has undergone aperiod of spectacular growth in recent decades. The word "extremal" comes from the nature of problems this field deals with: if a collection of finite objects (numbers, graphs, vectors, sets, etc. ) satisfies certain restrictions, how large or how small can it be? For example, how many people can we invite to a party where among each three people there are two who know each other and two who don't know each other? An easy Ramsey-type argument shows that at most five persons can attend such a party. Or, suppose we are given a finite set of nonzero integers, and are asked to mark an as large as possible subset of them under the restriction that the sum of any two marked integers cannot be marked.