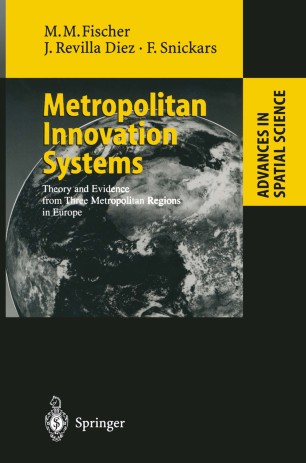 Theory and Evidence from Three Metropolitan Regions in Europe

This book presents the fmdings of a comparative study of three European metropolitan regions: Vienna, Barcelona and Stockholm. The heart of the work consists of empirical studies carefully designed and developed in order to identify the main actors and mechanisms supporting technological innovation in each of the metropolitan regions. The authors have also highlighted the similarities and differences across regions and countries, investigating how these came to be, and discussing the possible implications. The introductory as well as the concluding Chapter was written by Manfred M. Fischer who, assisted by Attila Varga, was also responsible for Chapter 2 on the Metropolitan Region of Vienna. Javier Revilla Diez contributed Chapter 3 on the Barcelona Metropolitan Region. Folke Snickars has provided Chapter 4 which examines the Metropolitan Region of Stockholm and. All authors have reviewed and commented on the whole contents so that the volume represents a collective endeavour which has been rendered as homogeneous as possible. A particular effort has been made to ensure that the study is based on a common conceptual framework.