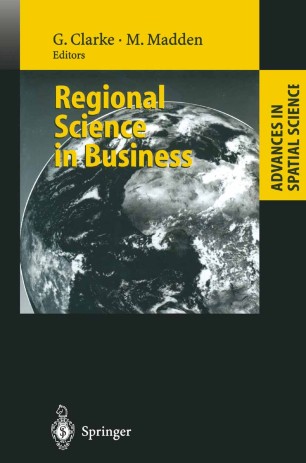 Graham Clarke and Moss Madden 1. 1 Background In the mid 1990s there were a number of papers in regional science that questioned the relevance and purpose of the entire sub-discipline. Bailly and Coffey (1994) for example, talked of 'regional science in crisis'. They argued that there were two fundamental problems. First, regional science was too theoretical in the sense that many of its products were models that could neither be calibrated (too complex) or operationalised (too abstract) in the real world. They suggested that regional science had not sufficiently demonstrated that it can address real-world problems and subsequently lacked a focus on relevant policy issues. Second, they argued that regional science had become too narrow in focus and had moved away too far from real people and their daily concerns or struggles in life. This was not the first time we had witnessed these sorts of arguments, both from outside the discipline and from within. Sayer (1976) was perhaps the first to argue for a shift from a model-based focus in regional science to one based on political economy. Breheny (1984) criticised the 'deep ignorance among regional scientists of the nature of practical policy making and implementation' (see also Rodwin (1987) for similar views in the mid 1980s). Such self-reflection is a feature of many disciplines as they reach maturity. There have been many similar reflections in geography (Johnston 1996, Barnes 1996) and economics (see the collection in the January edition of the Economic Journal 1991).