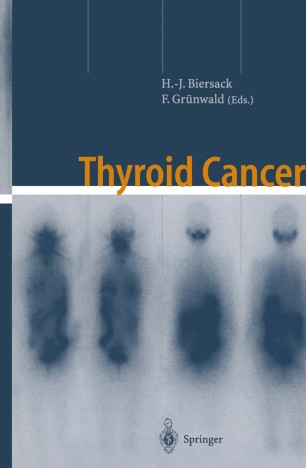 Thyroid cancer was first described at the end of the eighteenth cen­ tury. For one and a half centuries surgery remained the only effective therapeutic option for this cancer, until in 1946 radioiodine therapy was performed for the first time. Radioiodine therapy was brought to Germany 4 years later, in 1950. In the intervening 50 years, the use of iodine-131 has proved able to cure the cancer and its metastases. Per­ cutaneous radiation therapy had been added to the therapeutic ar­ mamentarium, but even now there is heated debate as to its potential. Suppressive 1-thyroxine supplement is a prerequisite for successful treatment, while cytotoxic drugs are mainly used for palliation. During the past 10 years, various new diagnostic and therapeutic approaches have been introduced. High-dose radioiodine therapy as well as redifferentiation therapy with retinoic acid seem beneficial. Diagnostic procedures such as magnetic resonance imaging (MRI), positron emission tomography (PET), as well as isonitriles (MIBI) 201 and thallium ( Tl), have proved useful for the follow-up of thyroid cancer. Two special issues are also discussed in this book. Iodine supple­ mentation in areas of iodine deficiency has led to a change in pathol­ ogy insofar as papillary thyroid cancer (with a better prognosis) has become more frequent than follicular carcinoma. A special chapter is dedicated to thyroid cancer in Chernobyl children.