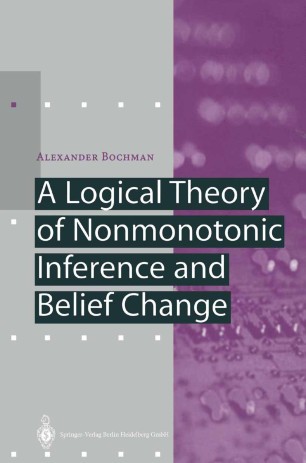 A Logical Theory of Nonmonotonic Inference and Belief Change

The main subject and objective of this book are logical foundations of non­ monotonic reasoning. This bears a presumption that there is such a thing as a general theory of non monotonic reasoning, as opposed to a bunch of systems for such a reasoning existing in the literature. It also presumes that this kind of reasoning can be analyzed by logical tools (broadly understood), just as any other kind of reasoning. In order to achieve our goal, we will provide a common logical basis and semantic representation in which different kinds of non monotonic reasoning can be interpreted and studied. The suggested framework will subsume ba­ sic forms of nonmonotonic inference, including not only the usual skeptical one, but also various forms of credulous (brave) and defeasible reasoning, as well as some new kinds such as contraction inference relations that express relative independence of pieces of data. In addition, the same framework will serve as a basis for a general theory of belief change which, among other things, will allow us to unify the main approaches to belief change existing in the literature, as well as to provide a constructive view of the semantic representation used. This book is a monograph rather than a textbook, with all its advantages (mainly for the author) and shortcomings (for the reader).