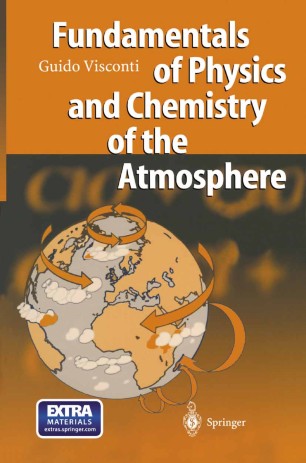 Fundamentals of Physics and Chemistry of the Atmosphere

This book originates from the translation of an Italian textbook on the physics and chemistry of the atmosphere. The idea for this earlier effort came to me after I published, in 1989, "L' Atmosfera", a popular science book. A few years later I discovered, to my great surprise, that it was adopted as a textbook by a few univer­ sities or university courses. The publication of the book coincided with the intro­ duction in Italy of a university curriculum on Environmental Science and a partial reform of the physics curriculum that allows the teaching of courses like Atmos­ pheric Physics, Meteorology and Environmental Physics. This convinced me to adapt the popular book to a full textbook although the effort turned out to be a much harder job than I thought. The content of the present book is not simply the translation from the Italian be­ cause it has been largely rewritten. Still, it contains basically what I have been teaching in my courses of Atmospheric Physics and Geophysics in the last twenty years. In doing that I have looted many "sacred texts". These may be divided into two categories: there are those like the book by J. M. Wall ace and P. V. Hobbs (see references) wh ich deal mostly with thermodynamics, radiation and dynamics at an elementary level and those like the book by 1. Holton, J. Pedlosky, A. Gill, K. Liu, etc. which are mostly professional texts and in some cases very specific.