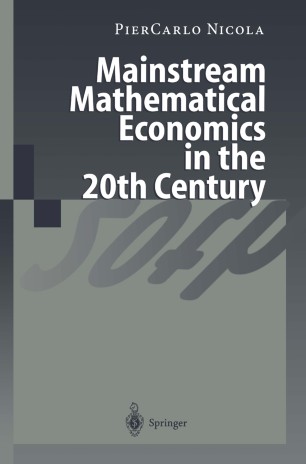 To write everything about nothing, or to write nothing about everything: this is the problem. (Anonym, circa 1996-97) The first idea to write a book on M athematical Economics, more or less ordered in a historical sequence, occurred to me in 1995, when I was asked, by Istituto delta Enciclopedia Italiana, to write the entry "Storia dell'economia 1 2 matematica" , for the collective work "Storia deI XX Secolo". I thought that it would be interesting to elaborate on the text presented to the editors, to turn it into a book aiming at giving a panorama of what, in my opinion, are the main 20th century contributions to mathematical eco­ nomics. Of course, only a narrow set of the contributions made by economic theorists could be included, both for space limitations and necessity, because 3 of the limited competence of any single author. For instance, I have paid very limited attention to what is now called Macroeconomics, and also to Game Theory, which actually has grown so much as to acquire scientific in­ dependence as a living branch of applied mathematics. For the same reason, I have also left completely untouched such fields as Mathematical Finance, Public Economics, Theory of Taxation, etc. I have always based my presentation on published material only, assuming that what is contained in working papers still waits to be confirmed, possibly in the first years of the 21th century.