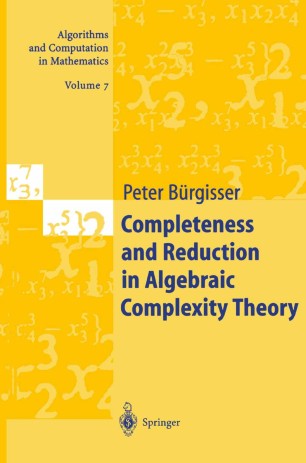 Part of the Algorithms and Computation in Mathematics book series (AACIM, volume 7)

One of the most important and successful theories in computational complex­ ity is that of NP-completeness. This discrete theory is based on the Turing machine model and achieves a classification of discrete computational prob­ lems according to their algorithmic difficulty. Turing machines formalize al­ gorithms which operate on finite strings of symbols over a finite alphabet. By contrast, in algebraic models of computation, the basic computational step is an arithmetic operation (or comparison) of elements of a fixed field, for in­ stance of real numbers. Hereby one assumes exact arithmetic. In 1989, Blum, Shub, and Smale [12] combined existing algebraic models of computation with the concept of uniformity and developed a theory of NP-completeness over the reals (BSS-model). Their paper created a renewed interest in the field of algebraic complexity and initiated new research directions. The ultimate goal of the BSS-model (and its future extensions) is to unite classical dis­ crete complexity theory with numerical analysis and thus to provide a deeper foundation of scientific computation (cf. [11, 101]). Already ten years before the BSS-paper, Valiant [107, 110] had proposed an analogue of the theory of NP-completeness in an entirely algebraic frame­ work, in connection with his famous hardness result for the permanent [108]. While the part of his theory based on the Turing approach (#P-completeness) is now standard and well-known among the theoretical computer science com­ munity, his algebraic completeness result for the permanents received much less attention.