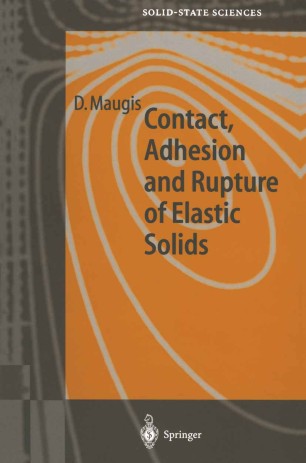 In 1970 an investigation into rubber friction, sponsored by a manufacturer of automobile windscreen wipers, was being carried out at the Cavendish Laboratory in Cambridge, England. When a smooth spherical slider of soft rubber was placed in contact with flat glass or perspex, the compliance of the rubber enabled it to conform to any slight roughness of the two surfaces such that perfect contact was obtained. In these circumstances the surfaces were found to adhere: under load the contact area exceeded that predicted by the Hertz theory of elastic contact, a contact area of finite size was seen at zero load and a tensile force was required to pull the surfaces apart. In an attempt to model these observations the JKR theory (Johnson, Kendall and Roberts, 1971) was born. At the same time, working in Moscow on adhesion of particles in colloidal suspension, Derjaguin, Muller and Toporov had developed a different ("DMT") theory of the adhesion of elastic spheres (DMT, 1975). At first it was thought that these theories were incompatible, until Tabor suggested that each applied to opposite ends of the spectrum of a non-dimensional parameter which expressed the ratio of the magnitude of the elastic deformation to the range of surface forces. This work was followed by Maugis and Barquins in the CNRS Laboratory at Belle Vue, who recognised the analogy between adhesion and fracture.