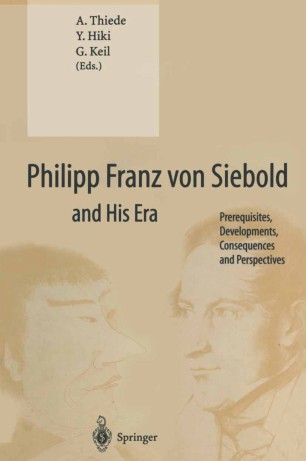 The Dutch East Indian Company was founded about 400 years ago, and in 1641 the artificial island of Dejima in the port of Nagasaki became its base. This island represented the only bridge between Japan, at that time in self-isolation, and the European countries, the Netherlands in particular. The physician and surgeon Philipp Franz von Siebold, born in Würzburg in 1796, was appointed as factory doctor of the Dutch East Indian Company in Dejima and, later on, he made history as the scientific discoverer of Japan for the Western world. His grandfather Karl Kaspar von Siebold was the first real university surgeon in Würzburg from 1796 until 1807, and was "the prominent surgeon of Southern Germany". In commemoration of Philipp Franz von Siebold, his 200th birthday and the developments introduced by him were celebrated by various events in Nagasaki and Würzburg in 1996. The present volume casts spotlights on medicine and surgery during this time, his achievements, and his surroundings, as well as on modern developments and the relationship between Europe and Japan.