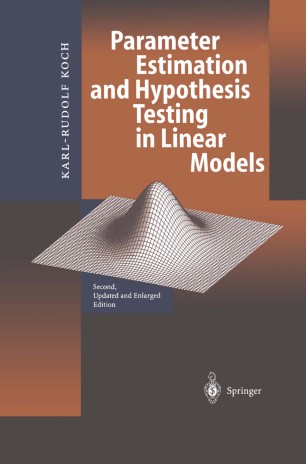 The necessity to publish the second edition of this book arose when its third German edition had just been published. This second English edition is there­ fore a translation of the third German edition of Parameter Estimation and Hypothesis Testing in Linear Models, published in 1997. It differs from the first English edition by the addition of a new chapter on robust estimation of parameters and the deletion of the section on discriminant analysis, which has been more completely dealt with by the author in the book Bayesian In­ ference with Geodetic Applications, Springer-Verlag, Berlin Heidelberg New York, 1990. Smaller additions and deletions have been incorporated, to im­ prove the text, to point out new developments or to eliminate errors which became apparent. A few examples have been also added. I thank Springer-Verlag for publishing this second edition and for the assistance in checking the translation, although the responsibility of errors remains with the author. I also want to express my thanks to Mrs. Ingrid Wahl and to Mrs. Heidemarlen Westhiiuser who prepared the second edition. Bonn, January 1999 Karl-Rudolf Koch Preface to the First Edition This book is a translation with slight modifications and additions of the second German edition of Parameter Estimation and Hypothesis Testing in Linear Models, published in 1987.