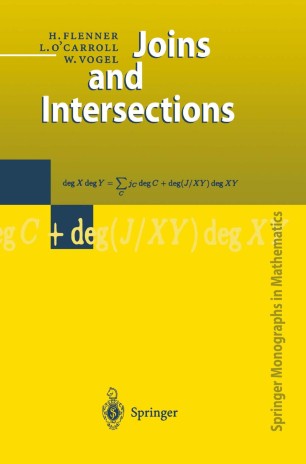 Dedicated to the memory of Wolfgang Classical Intersection Theory (see for example Wei! [Wei]) treats the case of proper intersections, where geometrical objects (usually subvarieties of a non­ singular variety) intersect with the expected dimension. In 1984, two books appeared which surveyed and developed work by the individual authors, co­ workers and others on a refined version of Intersection Theory, treating the case of possibly improper intersections, where the intersection could have ex­ cess dimension. The first, by W. Fulton [Full] (recently revised in updated form), used a geometrical theory of deformation to the normal cone, more specifically, deformation to the normal bundle followed by moving the zero section to make the intersection proper; this theory was due to the author together with R. MacPherson and worked generally for intersections on algeb­ raic manifolds. It represents nowadays the standard approach to Intersection Theory. The second, by W. Vogel [Vogl], employed an algebraic approach to inter­ sections; although restricted to intersections in projective space it produced an intersection cycle by a simple and natural algorithm, thus leading to a Bezout theorem for improper intersections. It was developed together with J. Stiickrad and involved a refined version of the classical technique ofreduc­ tion to the diagonal: here one starts with the join variety and intersects with successive hyperplanes in general position, laying aside components which fall into the diagonal and intersecting the residual scheme with the next hyperplane; since all the hyperplanes intersect in the diagonal, the process terminates.