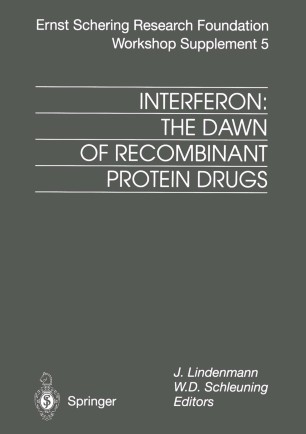 Forty years of Interferon I wish to dedicate this short introduction to the memory of Alick Isaacs (1921-1967), and to that of Sir Christopher Andrewes (1896-1988). Let us go back more than 40 years. In 1956 Isaacs was in charge of the Wodd Influenza Centre. Andrewes was head of the division of bac­ teriology and virology, and deputy director of the National Institute for Medical Research in London. When researchers are faced with a seemingly new phenomenon, ex­ planations are easy to come by. These explanations fall into two broad categories: the phenomenon in question is either due to something or to the lack of something. I apologize for the primitive way in which I ex­ press this, but I am going to give three examples, scattered over 100 years, of what I mean. First example: in 1880 the great French microbiologist Louis Pas­ teur was involved in work on chicken cholera. He was struck by the following observation: if a suitable chicken broth was inoculated with the bacterium, the organism grew profusely and the liquid became tur­ bid. If he now freed the fluid, by sedimentation or filtration, from the bulk of the organisms and re-inoculated it with the same bacterium, no growth occurred.