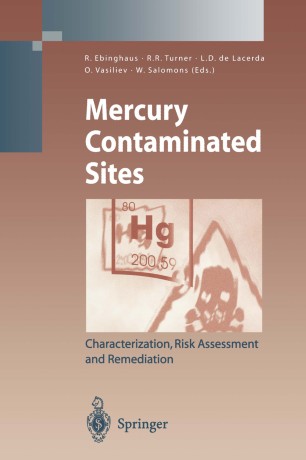 Mercury is outstanding among the global environmental pollutants of continuing th concern. Especially in the last decade of the 20 century, environmental scientists, legislators, politicians, and the public have become more aware of mercury pollu­ tion in the global environment. It has often been suggested that anthropogenic emissions are leading to a general increase in mercury on local, regional, and glo­ bal scales. Numerous industrial activities, including the mining of gold, silver, and mercury itself, have caused mercury contamination of terrestrial and aquatic eco­ systems. Mercury-contaminated sites are abundant worldwide. Mercury has been accumulated as an "industrial legacy" in the rocks, soils, and sediments at, and adjacent to, industrial sites and now may pose significant risks to human and eco­ logical health. Direct inputs of mercury into the environment by industrial activi­ ties have generally decreased significantly in the Western world over the past three decades. However, sources such as coal combustion and the use of mercury in gold and silver mining continue to be of importance on a global scale. The same is true for diffuse sources such as terrestrial landscapes that have been impacted by mer­ cury inputs from the atmosphere in the past. Soils (and vegetation) located close to large atmospheric mercury sources have clearly been sinks while these sources were active in the past. In the long run, however, these soils may have become important diffuse area sources after the original emissions were discontinued.