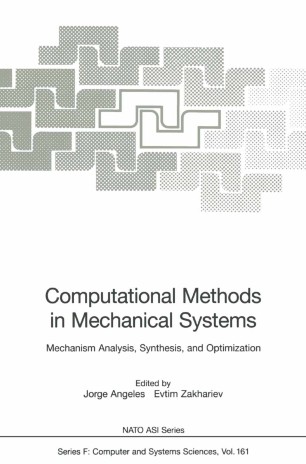 The chapters of this book summarize the lectures delivered du ring the NATO Advanced Study Institute (ASI) on Computational Methods in Mechanisms, that took place in the Sts. Constantin and Elena Resort, near Varna, on the Bulgarian Coast of the Black Sea, June 16-28, 1997. The purpose of the ASI was to bring together leading researchers in the area of mechanical systems at large, with special emphasis in the computational issues around their analysis, synthesis, and optimization, during two weeks of lectures and discussion. A total of 89 participants from 23 count ries played an active role during the lectures and sessions of contributed papers. Many of the latter are being currently reviewed for publication in specialized journals. The subject of the book is mechanical systems, Le. , systems composed of rigid and flexible bodies, coupled by mechanical means so as to constrain their various bodies in a goal-oriented manner, usually driven under computer con­ trol. Applications of the discipline are thus of the most varied nature, ranging from transportation systems to biomedical devices. U nder normal operation conditions, the constitutive bodies of a mechanical system can be consid­ ered to be rigid, the rigidity property then easing dramatically the analysis of the kinematics and dynamics of the system at hand. Examples of these systems are the suspension of a terrestrial vehicle negotiating a curve at speeds within the allowed or recommended limits and the links of multiaxis industrial robots performing conventional pick-and-place operations.