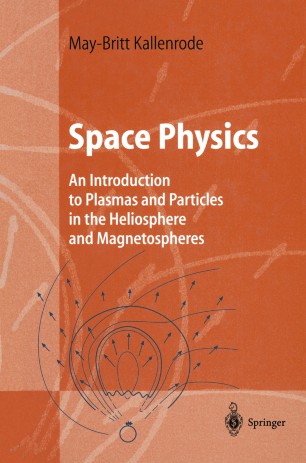 An Introduction to Plasmas and Particles in the Heliosphere and Magnetospheres

Part of the Advanced Texts in Physics book series (ADTP)

The heliosphere and magnetospheres of the planets provide large natural plasma laboratories. This book is a broad, yet selective treatment of the physics of ionized gases and charged particles in the solar-terrestrial environment. The first few chapters deal with the fundamentals of plasma physics, covering such topics as single-particle motion, plasmas as fluids, magnetohydrodynamics, a brief introduction to kinetic theory, and plasma waves. Subsequent chapters discuss observations of the sun and the solar wind, energetic particles in interplanetary space and in the magnetoshperes, magnetized and unmagnetized planets, and solar-terrestrial relations, in particular the aurora. These chapters also describe the applications of these principles to space-plasma observations and introduce more-complex phenomena, such as collisionless shocks and wave-particle interactions.>