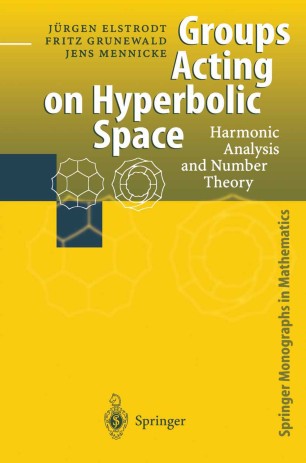 This book is concerned with discontinuous groups of motions of the unique connected and simply connected Riemannian 3-manifold of constant curva­ ture -1, which is traditionally called hyperbolic 3-space. This space is the 3-dimensional instance of an analogous Riemannian manifold which exists uniquely in every dimension n :::: 2. The hyperbolic spaces appeared first in the work of Lobachevski in the first half of the 19th century. Very early in the last century the group of isometries of these spaces was studied by Steiner, when he looked at the group generated by the inversions in spheres. The ge­ ometries underlying the hyperbolic spaces were of fundamental importance since Lobachevski, Bolyai and Gauß had observed that they do not satisfy the axiom of parallels. Already in the classical works several concrete coordinate models of hy­ perbolic 3-space have appeared. They make explicit computations possible and also give identifications of the full group of motions or isometries with well-known matrix groups. One such model, due to H. Poincare, is the upper 3 half-space IH in JR . The group of isometries is then identified with an exten­ sion of index 2 of the group PSL(2,