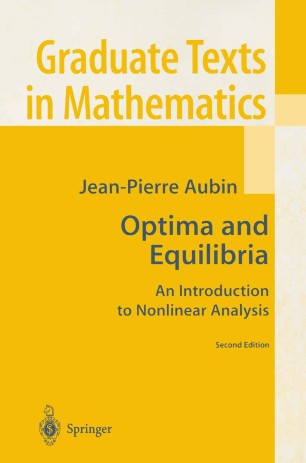 An Introduction to Nonlinear Analysis

Advances in game theory and economic theory have proceeded hand in hand with that of nonlinear analysis and in particular, convex analysis. These theories motivated mathematicians to provide mathematical tools to deal with optima and equilibria. Jean-Pierre Aubin, one of the leading specialists in nonlinear analysis and its applications to economics and game theory, has written a rigorous and concise-yet still elementary and self-contained- text-book to present mathematical tools needed to solve problems motivated by economics, management sciences, operations research, cooperative and noncooperative games, fuzzy games, etc. It begins with convex and nonsmooth analysis,the foundations of optimization theory and mathematical programming. Nonlinear analysis is next presented in the context of zero-sum games and then, in the framework of set-valued analysis. These results are applied to the main classes of economic equilibria. The text continues with game theory: noncooperative (Nash) equilibria, Pareto optima, core and finally, fuzzy games. The book contains numerous exercises and problems: the latter allow the reader to venture into areas of nonlinear analysis that lie beyond the scope of the book and of most graduate courses. -(See cont. News remarks)