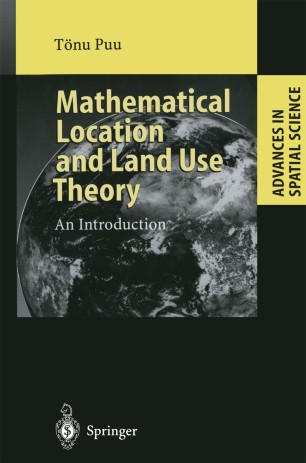 Mathematical Location and Land Use Theory

In his student years the author of this book was fortunate to have Tord Palander, once the leading location theorist of his age, as teacher and later as his thesis adviser. Palander started his economics career in the 30es with taking interest in spatial economics, and ended up with monetary economics in the 50es. The author made the reverse route. So, in the intersection of our professional lives Palander and I both worked with monetary issues, and we never spoke of spatial economics in his remaining lifetime. Despite this the author assimilated Palander's basic philosophy which perspired already through his dissertation (Beitriige zur Standortstheorie ): Good science is there to be easily understood, the difficult and mysterious being under the con­ stant suspicion of being wrong. Also, it was when trying to organize Palander's scientific remains upon his death in 1972 that the author found two small papers by Martin Beckmann from the early 50es. These concise contributions, largely overlooked, which did cast the entire spatial trade equilibrium in terms of two partial differen­ tial equations became the focus of interest of the author for many years. It was, however, at first hard to get ahead with the Beckmann model, just because it was so general. It could subsume most of the models ever devel­ oped in spatial economics, but, due to this very generality, it was difficult to get out any particular information, except in terms of examples.