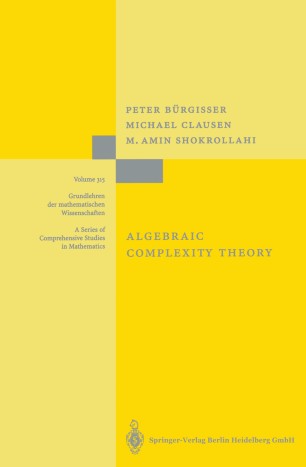 With the Collaboration of Thomas Lickteig

The algorithmic solution of problems has always been one of the major concerns of mathematics. For a long time such solutions were based on an intuitive notion of algorithm. It is only in this century that metamathematical problems have led to the intensive search for a precise and sufficiently general formalization of the notions of computability and algorithm. In the 1930s, a number of quite different concepts for this purpose were pro­ posed, such as Turing machines, WHILE-programs, recursive functions, Markov algorithms, and Thue systems. All these concepts turned out to be equivalent, a fact summarized in Church's thesis, which says that the resulting definitions form an adequate formalization of the intuitive notion of computability. This had and continues to have an enormous effect. First of all, with these notions it has been possible to prove that various problems are algorithmically unsolvable. Among of group these undecidable problems are the halting problem, the word problem theory, the Post correspondence problem, and Hilbert's tenth problem. Secondly, concepts like Turing machines and WHILE-programs had a strong influence on the development of the first computers and programming languages. In the era of digital computers, the question of finding efficient solutions to algorithmically solvable problems has become increasingly important. In addition, the fact that some problems can be solved very efficiently, while others seem to defy all attempts to find an efficient solution, has called for a deeper under­ standing of the intrinsic computational difficulty of problems.