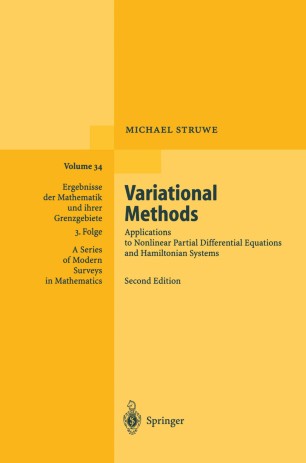 Hilbert's talk at the second International Congress of 1900 in Paris marked the beginning of a new era in the calculus of variations. A development began which, within a few decades, brought tremendous success, highlighted by the 1929 theorem of Ljusternik and Schnirelman on the existence of three distinct prime closed geodesics on any compact surface of genus zero, and the 1930/31 solution of Plateau's problem by Douglas and Radò. The book gives a concise introduction to variational methods and presents an overview of areas of current research in this field. This new edition has been substantially enlarged, a new chapter on the Yamabe problem has been added and the references have been updated. All topics are illustrated by carefully chosen examples, representing the current state of the art in their field.

"The fourth edition of Michael Struwe’s book Variational Methods: Applications to Nonlinear Partial Differential Equations and Hamiltonian Systems was published in 2008, 18 years after the first edition. … The bibliography alone would make it a valuable reference as it contains nearly 500 references. … Struwe’s book is addressed to researchers in differential geometry and partial differential equations." (John D. Cook, MAA Online, January, 2009)