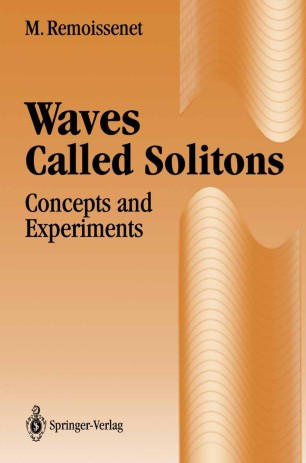 Nonlinearity is a fascinating element of nature whose importance has been appreciated for many years when considering large-amplitude wave motions observed in various fields ranging from fluids and plasmas to solid-state, chemical, biological, and geological systems. Localized large-amplitude waves called solitons, which propagate without spreading and have particle-like properties, represent one of the most striking aspects of nonlinear phenomena. Although a wealth of literature on the subject, including theoretical and numerical studies, is available in good recent books and research journals, very little material has found its way into introductory texbooks and curricula. This is perhaps due to a belief that nonlinear physics is difficult and cannot be taught at an introductory level to undergraduate students and practitioners. Consequently, there is considerable interest in developing practical material suitable for students, at the lowest introductory level. This book is intended to be an elementary introduction to the physics of solitons, for students, physicists, engineers and practitioners. We present the modeling of nonlinear phenomena where soliton-like waves are involved, together with applications to a wide variety of concrete systems and experiments. This book is designed as a book of physical ideas and basic methods and not as an up-to-the­ minute book concerned with the latest research results. The background in physics and the amount of mathematical knowledge assumed of the reader is within that usually accumulated by junior or senior students in physics.

"No other book at this level gives such a firm grasp of the physics behind the phenomena." - Applied Mechanics Reviews
Buy options