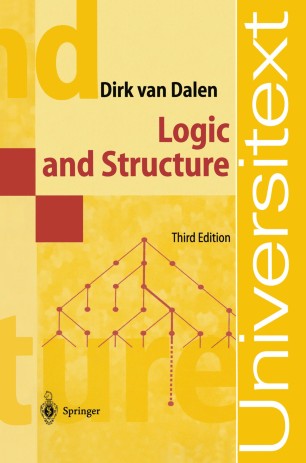 The discussion of classical logic is rounded off with a concise exposition of second-order logic.

In view of the growing recognition of constructive methods and principles, one chapter is devoted to intuitionistic logic. Completeness is established for Kripke semantics. A number of specific constructive features, such as apartness and equality, the Gödel translation, the disjunction and existence property have been incorporated.

The power and elegance of natural deduction is demonstrated best in the part of proof theory called `cut-elimination' or `normalization'. Chapter 6 is devoted to this topic; it contains the basic facts on the structure of derivations, both classically and intuitionistically.

Finally, this edition contains a new chapter on Gödel's first incompleteness theorem. The chapter is self-contained, it provides a systematic exposition of primitive recursion and partial recursive functions, recursive by enumerable sets, and recursive separability. The arithmetization of Peano's arithmetic is based on the natural deduction system.