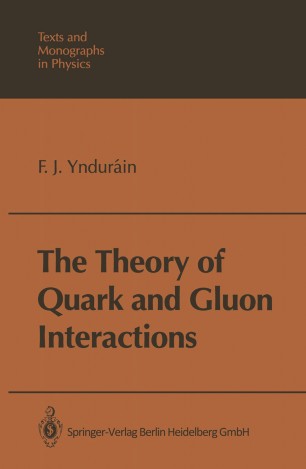 The Theory of Quark and Gluon Interactions

The present book is not merely an elaboration of the 1982 text Quantum Chromodynamics: An Introduction to the Theory of Quarks and Gluons. In fact, a lot of material has been added: some of which is entirely new, and some of which is an extension of topics in the older text. Among the latter there are two sections dealing with the background field method, and the expansion of the section devoted to processes describable by perturbative QCD (other than deep inelastic scattering) into a whole chapter, containing a detailed description of Drell-Van scattering, jet physics, exclusive processes, QCD sum rules, etc. Besides this, we have added a completely new chapter on constituent models of hadrons, including a derivation of the quark­ quark potential, and, also entirely new, a half-chapter containing a detailed introduction to lattice QCD. An extra short chapter on the parameters of QCD and an appendix on group integration contribute to making the present book a really new text, sufficiently so to justify the change of title to The Theory of Quark and Gluon Interactions, a change that also emphasizes the consolidation of QCD as the theory of strong interactions. Of course even with the inclusion of the new material there are whole areas of quark and gluon physics not covered at all.