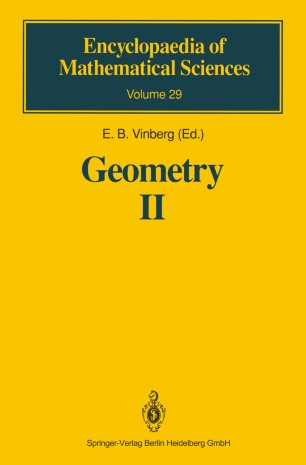 Spaces of constant curvature, i.e. Euclidean space, the sphere, and Loba­ chevskij space, occupy a special place in geometry. They are most accessible to our geometric intuition, making it possible to develop elementary geometry in a way very similar to that used to create the geometry we learned at school. However, since its basic notions can be interpreted in different ways, this geometry can be applied to objects other than the conventional physical space, the original source of our geometric intuition. Euclidean geometry has for a long time been deeply rooted in the human mind. The same is true of spherical geometry, since a sphere can naturally be embedded into a Euclidean space. Lobachevskij geometry, which in the first fifty years after its discovery had been regarded only as a logically feasible by-product appearing in the investigation of the foundations of geometry, has even now, despite the fact that it has found its use in numerous applications, preserved a kind of exotic and even romantic element. This may probably be explained by the permanent cultural and historical impact which the proof of the independence of the Fifth Postulate had on human thought.