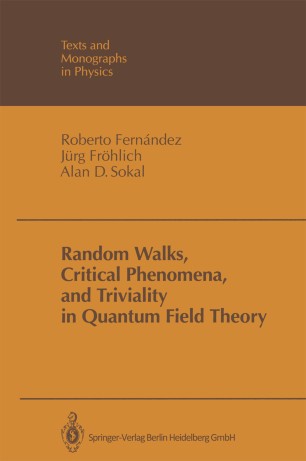 Simple random walks - or equivalently, sums of independent random vari­ ables - have long been a standard topic of probability theory and mathemat­ ical physics. In the 1950s, non-Markovian random-walk models, such as the self-avoiding walk,were introduced into theoretical polymer physics, and gradu­ ally came to serve as a paradigm for the general theory of critical phenomena. In the past decade, random-walk expansions have evolved into an important tool for the rigorous analysis of critical phenomena in classical spin systems and of the continuum limit in quantum field theory. Among the results obtained by random-walk methods are the proof of triviality of the cp4 quantum field theo­ ryin space-time dimension d (::::) 4, and the proof of mean-field critical behavior for cp4 and Ising models in space dimension d (::::) 4. The principal goal of the present monograph is to present a detailed review of these developments. It is supplemented by a brief excursion to the theory of random surfaces and various applications thereof. This book has grown out of research carried out by the authors mainly from 1982 until the middle of 1985. Our original intention was to write a research paper. However, the writing of such a paper turned out to be a very slow process, partly because of our geographical separation, partly because each of us was involved in other projects that may have appeared more urgent.