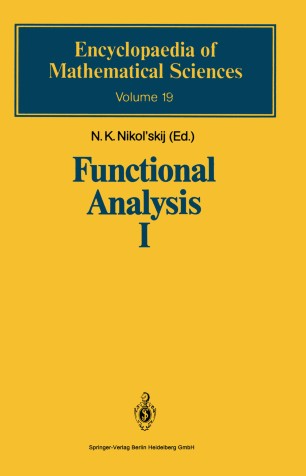 Up to a certain time the attention of mathematicians was concentrated on the study of individual objects, for example, specific elementary functions or curves defined by special equations. With the creation of the method of Fourier series, which allowed mathematicians to work with 'arbitrary' functions, the individual approach was replaced by the 'class' approach, in which a particular function is considered only as an element of some 'function space'. More or less simultane­ ously the development of geometry and algebra led to the general concept of a linear space, while in analysis the basic forms of convergence for series of functions were identified: uniform, mean square, pointwise and so on. It turns out, moreover, that a specific type of convergence is associated with each linear function space, for example, uniform convergence in the case of the space of continuous functions on a closed interval. It was only comparatively recently that in this connection the general idea of a linear topological space (L TS)l was formed; here the algebraic structure is compatible with the topological structure in the sense that the basic operations (addition and multiplication by a scalar) are continuous.