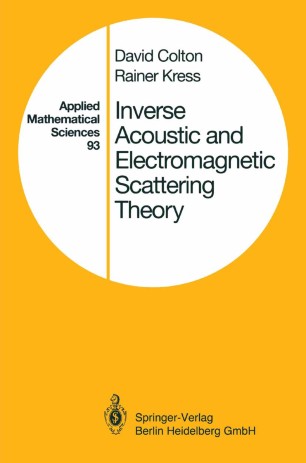 It has now been almost ten years since our first book on scattering theory ap­ peared [32]. At that time we claimed that "in recent years the development of integral equation methods for the direct scattering problem seems to be nearing completion, whereas the use of such an approach to study the inverse scattering problem has progressed to an extent that a 'state of the art' survey appears highly desirable". Since we wrote these words, the inverse scattering problem for acoustic and electromagnetic waves has grown from being a few theoreti­ cal considerations with limited numerical implementations to a weH developed mathematical theory with tested numerical algorithms. This maturing of the field of inverse scattering theory has been based on the realization that such problems are in general not only nonlinear but also improperly posed in the sense that the solution does not depend continuously on the measured data. This was emphasized in [32] and treated with the ideas and tools available at that time. Now, almost ten years later, these initial ideas have developed to the extent that a monograph summarizing the mathematical basis of the field seems appropriate. This book is oUf attempt to write such a monograph. The inverse scattering problem for acoustic and electromagnetic waves can broadly be divided into two classes, the inverse obstacle problem and the inverse medium problem.