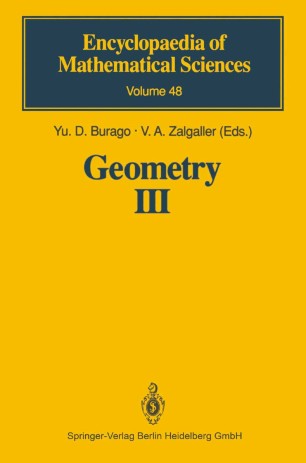 The original version of this article was written more than fiveyears ago with S. Z. Shefel',a profound and original mathematician who died in 1984. Sincethen the geometry of surfaces has continued to be enriched with ideas and results. This has required changes and additions, but has not influenced the character of the article, the design ofwhich originated with Shefel'. Without knowing to what extent Shefel' would have approved the changes, I should nevertheless like to dedicate this article to his memory. (Yu. D. Burago) We are trying to state the qualitative questions of the theory of surfaces in Euclidean spaces in the form in which they appear to the authors at present. This description does not entirely correspond to the historical development of the subject. The theory of surfaces was developed in the first place mainly as the 3 theory of surfaces in three-dimensional Euclidean space E ; however, it makes sense to begin by considering surfaces F in Euclidean spaces of any dimension n~ 3. This approach enables us, in particular, to put in a new light some 3 unsolved problems of this developed (and in the case of surfaces in E fairly complete) theory, and in many cases to refer to the connections with the present stage ofdevelopment of the theory of multidimensional submanifolds. The leading question of the article is the problem of the connection between classes of metrics and classes of surfaces in En.