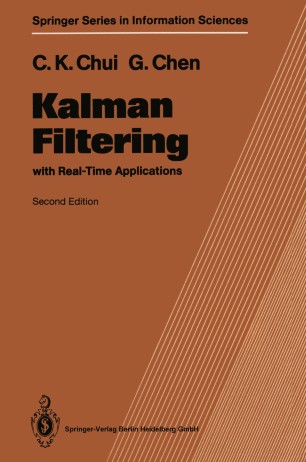 In addition to making a number of minor corrections and updat­ ing the references, we have expanded the section on "real-time system identification" in Chapter 10 of the first edition into two sections and combined it with Chapter 8. In its place, a very brief introduction to wavelet analysis is included in Chapter 10. Although the pyramid algorithms for wavelet decompositions and reconstructions are quite different from the Kalman filtering al­ gorithms, they can also be applied to time-domain filtering, and it is hoped that splines and wavelets can be incorporated with Kalman filtering in the near future. College Station and Houston Charles K. Chui September 1990 Guanrong Chen Preface to the First Edition Kalman filtering is an optimal state estimation process applied to a dynamic system that involves random perturbations. More precisely, the Kalman filter gives a linear, unbiased, and min­ imum error variance recursive algorithm to optimally estimate the unknown state of a dynamic system from noisy data taken at discrete real-time. It has been widely used in many areas of industrial and government applications such as video and laser tracking systems, satellite navigation, ballistic missile trajectory estimation, radar, and fire control. With the recent development of high-speed computers, the Kalman filter has become more use­ ful even for very complicated real-time applications.