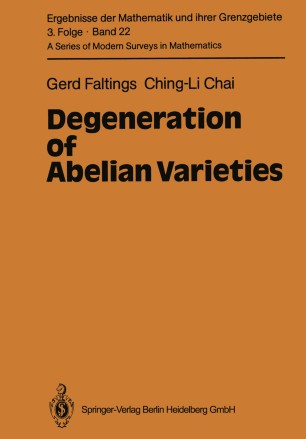 The topic of this book is the theory of degenerations of abelian varieties and its application to the construction of compactifications of moduli spaces of abelian varieties. These compactifications have applications to diophantine problems and, of course, are also interesting in their own right. Degenerations of abelian varieties are given by maps G - S with S an irre­ ducible scheme and G a group variety whose generic fibre is an abelian variety. One would like to classify such objects, which, however, is a hopeless task in this generality. But for more specialized families we can obtain more: The most important theorem about degenerations is the stable reduction theorem, which gives some evidence that for questions of compactification it suffices to study semi-abelian families; that is, we may assume that G is smooth and flat over S, with fibres which are connected extensions of abelian varieties by tori. A further assumption will be that the base S is normal, which makes such semi-abelian families extremely well behaved. In these circumstances, we give a rather com­ plete classification in case S is the spectrum of a complete local ring, and for general S we can still say a good deal. For a complete base S = Spec(R) (R a complete and normal local domain) the main result about degenerations says roughly that G is (in some sense) a quotient of a covering G by a group of periods.