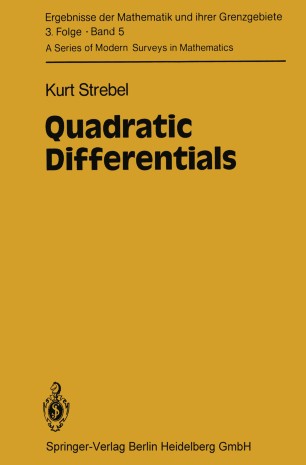 A quadratic differential on aRiemann surface is locally represented by a ho­ lomorphic function element wh ich transforms like the square of a derivative under a conformal change of the parameter. More generally, one also allows for meromorphic function elements; however, in many considerations it is con­ venient to puncture the surface at the poles of the differential. One is then back at the holomorphic case. A quadratic differential defines, in a natural way, a field of line elements on the surface, with singularities at the critical points, i.e. the zeros and poles of the differential. The integral curves of this field are called the trajectories of the differential. A large part of this book is about the trajectory structure of quadratic differentials. There are of course local and global aspects to this structure. Be­ sides, there is the behaviour of an individual trajectory and the structure deter­ mined by entire subfamilies of trajectories. An Abelian or first order differential has an integral or primitive function is in general not single-valued. In the case of a quadratic on the surface, which differential, one first has to take the square root and then integrate. The local integrals are only determined up to their sign and arbitrary additive constants. However, it is this multivalued function which plays an important role in the theory; the trajectories are the images of the horizontals by single valued branches of its inverse.