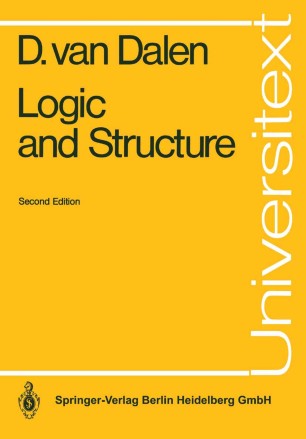 The discussion of classical logic is rounded off with a concise exposition of second-order logic.

In view of the growing recognition of constructive methods and principles, one chapter is devoted to intuitionistic logic. Completeness is established for Kripke semantics. A number of specific constructive features, such as apartness and equality, the Gödel translation, the disjunction and existence property have been incorporated.

The power and elegance of natural deduction is demonstrated best in the part of proof theory called `cut-elimination' or `normalization'. Chapter 6 is devoted to this topic; it contains the basic facts on the structure of derivations, both classically and intuitionistically.

Finally, this edition contains a new chapter on Gödel's first incompleteness theorem. The chapter is self-contained, it provides a systematic exposition of primitive recursion and partial recursive functions, recursive by enumerable sets, and recursive separability. The arithmetization of Peano's arithmetic is based on the natural deduction system.

Dirk van Dalen studied at the University of Amsterdam, where he obtained his PhD. He has taught since 1960 at Utrecht University, where he is full professor. He also taught at MIT and Oxford. His technical work is mostly in the area of intuitionistic mathematics and logic. He uses to call attention to the benefits and challenges of constructive methods. His current project is a biography of L.E.J. Brouwer and the editing of Brouwer's correspondence.

"This book teaches logic to mathematicians in just the way I would have wished. … Beginning with the propositional calculus by means of truth-tables, i.e. the semantics, it proceeds to the syntactics in the form of Gentzen’s natural deduction. … this fourth edition has a long final chapter added, on Gödel’s incompleteness theorem. … The chapter follows traditional lines but preserves the excellent quality of the earlier chapters. This is a delightful textbook, with plenty of examples for the reader." (C.W. Kilmister, The Mathematical Gazette, Vol. 89(515), 2005)

"This is the fourth edition of van Dalen’s classic textbook on logic in the popular ‘Universitext’ -series. … this book explains clearly all aspects of logic which a novice in this matter should learn by heart. … Reading this book was a real delight. A lot of the fun was in the exercises … heartily recommend this excellent textbook; … Current students may have little interest in formal mathematics … the problem will solve itself when they all have a copy on their personal bookshelf." (Pieter Audenaert, Bulletin of the Belgian Mathematical Society, Vol. 12 (3), 2005)