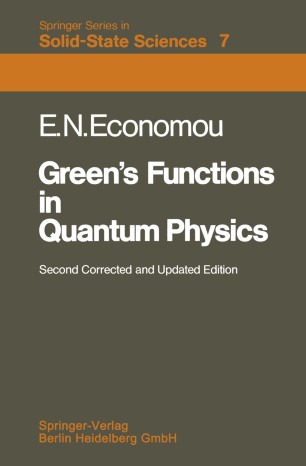 In this edition the second and main part of the book has been considerably expanded as to cover important applications of the formalism. In Chap.5 a section was added outlining the extensive role of the tight­ binding (or equivalently the linear combination of atomic-like orbitals) approach to many branches of solid-state physics. Some additional informa­ tion (including a table of numerical values) regarding square and cubic lattice Green's functions were incorporated. In Chap.6 the difficult subjects of superconductivity and the Kondo effect are examined by employing an appealingly simple connection to the question of the existence of a bound state in a very shallow potential well. The existence of such a bound state depends entirely on the form of the un­ perturbed density of states near the end of the spectrum: if the density of states blows up there is always at least one bound state. If the density of states approaches zero continuously, a critical depth (and/or width) of the well must be reached in order to have a bound state. The borderline case of a finite discontinuity (which is very important to superconductivity and the Kondo effect) always produces a bound state with an exponentially small binding energy.