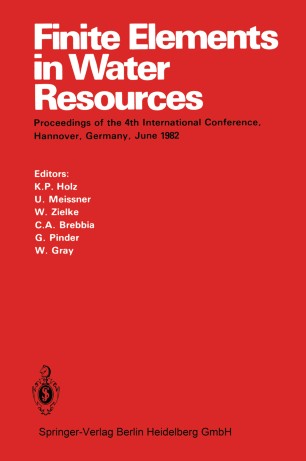 These proceedings contain the papers presented at the Fourth International Conference on Finite Elements in Water Resources, held in June, 1982, at the University of Hannover, Federal Re­ public of Germany. This Conference continued the successful series of previous conferences held at Princeton University in 1976, at Imperial College in 1978, and at the University of Mississippi in 1980. Since Finite Elements have proved to be a powerful means for analysing water resource problems, the principal objective of the Conference was to provide an exchange of experiences in practical applications of the finite element method and to establish a forum for discussion regarding accuracy, economy, limitations and improvements. Related discretization methods were included within the scope of the Conference. New develop­ ments in numerical and computational techniques, basic mathe­ matical formulations, and soft- and hardware aspects were considered to be equally important topics for an exchange of ideas between both theoretically and practically oriented re­ searchers. The Conference Organizing Committee is very grateful to the many distinguished scientists who attended the Conference, and for their contributions towards the proceedings. This collection of papers in being made available to a wider audience of en­ gineers and scientists by CML Publications in Southampton, U.K.