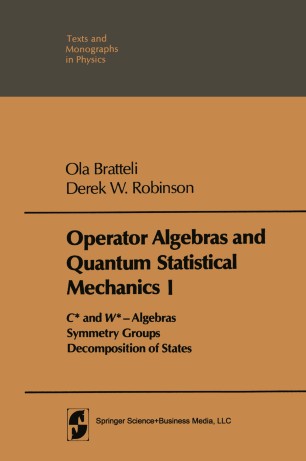 In this book we describe the elementary theory of operator algebras and parts of the advanced theory which are of relevance, or potentially of relevance, to mathematical physics. Subsequently we describe various applications to quantum statistical mechanics. At the outset of this project we intended to cover this material in one volume but in the course of develop­ ment it was realized that this would entail the omission of various interesting topics or details. Consequently the book was split into two volumes, the first devoted to the general theory of operator algebras and the second to the applications. This splitting into theory and applications is conventional but somewhat arbitrary. In the last 15-20 years mathematical physicists have realized the importance of operator algebras and their states and automorphisms for problems offield theory and statistical mechanics. But the theory of 20 years ago was largely developed for the analysis of group representations and it was inadequate for many physical applications. Thus after a short honey­ moon period in which the new found tools of the extant theory were applied to the most amenable problems a longer and more interesting period ensued in which mathematical physicists were forced to redevelop the theory in relevant directions. New concepts were introduced, e. g. asymptotic abelian­ ness and KMS states, new techniques applied, e. g. the Choquet theory of barycentric decomposition for states, and new structural results obtained, e. g. the existence of a continuum of nonisomorphic type-three factors.