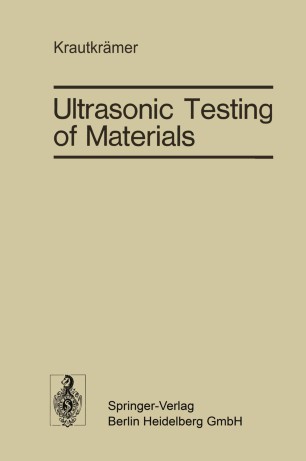 This second English edition is based on the third German edition. In view of most recent technological advances it has become necessary in many instances to supplement the second German edition and to revise some parts completely. In addition to piezo-electric methods, others are now also extensively discussed in Chapter 8. As for the intensity method, ultrasonic holo­ graphy is treated in the new Section 9. 4. In Part B, for reasons of syste­ matics, the resonance method has been included under transit-time methods. It appeared necessary to elaborate in greater detail the defini­ tion of the properties of pulse-echo testing equipment and their measure­ ments (10. 4). The more recent findings of pulse spectroscopy (5. 6) and sound-emission analysis (12) are mentioned only in passing because their significance is still controversial. Apart from numerous additions, particularly those concerning automatic testing installations, Part C also contains a new chapter which deals with tests on nuclear reactors (28), as well as a brief discussion of surface-hardness tests (32. 4). It became impossible to include a critical analysis of the principal standards in Chapter 33. A few are mentioned, however, where the most important subjects (e. g. , the testing of welded joints in Chapter 26) are discussed, while others are only tabulated in Chapter 33. The present, vastly increased literature made bibliographical selection rather difficult. Consequently, we wish to apologize to any authors whose reports may have been omitted because of limitations governing the size of this volume.