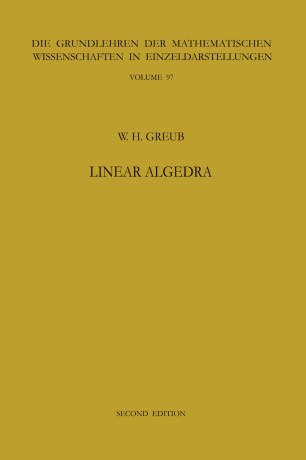 Besides the very obvious change from German to English, the second edition of this book contains many additions as weil as a great many other changes. It might even be called a new book altogether were it not for the fact that the essential character of the book has remained the same; in other words, the entire presentation continues to be based on an axiomatic treatment of linear spaces. In this second edition, the thorough-going restriction to linear spaces of finite dimension has been removed. Another complete change is the restriction to linear spaces with real or complex coefficients, thereby removing a number of relatively involved discussions which did not really contribute substantially to the subject. On p.6 there is a list of those chapters in which the presentation can be transferred directly to spaces over an arbitrary coefficient field. Chapter I deals with the general properties of a linear space. Those concepts which are only valid for finitely many dimensions are discussed in a special paragraph. Chapter 11 now covers only linear transformations while the treat­ ment of matrices has been delegated to a new chapter, chapter 111. The discussion of dual spaces has been changed; dual spaces are now intro­ duced abstractly and the connection with the space of linear functions is not established untillater.