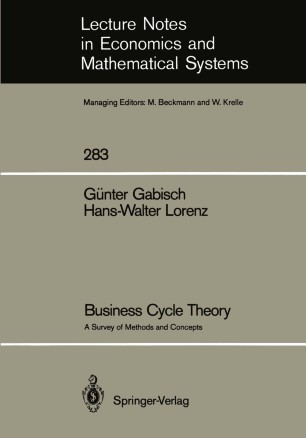 A Survey of Methods and Concepts

"Is the business cycle obsolete?" This often cited title of a book edited by Bronfenbren­ ner with the implicit affirmation of the question reflected the attitude of mainstream macroeconomics in the Sixties regarding the empirical relevance of cyclic motions of an economy. The successful income policies, theoretically grounded in Keynesian macroec­ onomics, seemed to have eased or even abolished the fluctuations in West,ern economies which motivated studies of many classical and neoclassical economists for more than 100 years. The reasoning behind the conviction that business cycles would increasingly become irrelevant was rather simple: if an economy fluctuates for whatever reason, then it is almost always possible to neutralize these cyclic motions by means of anti-cyclic demand policies. From the 1950's until the mid-Sixties business cycle theory had often been consid­ ered either as an appendix to growth theory or as an academic exercise in dynamical economics. The common business cycle models were essentially multiplier-accelerator models whose sensitive dependence on parameter values (in order to be called busi­ ness cycle models) suggested a rather improbable occurrence of continuing oscillations. The obvious success in compensating business cycles in those days prevented intensive concern with the occurrence of cycles. Rather, business cycle theory turned into sta­ bilization theory which investigated theoretical possibilities of stabilizing a fluctuating economy. Many macroeconomic textbooks appeared in the Sixties which consequently identified business cycle theory with inquiries on the possibilities to stabilize economies 2 Introduction by means of active fiscal or monetary policies.