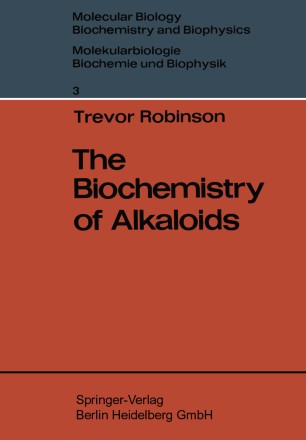 The Biochemistry of Alkaloids

The alkaloids were of great importance to mankind for centuries, long before they were recognized as a chemical class. The influence they have had on literature is hinted at by some of the quotations I have used as chapter headings. Their in­ fluence on folklore and on medicine has been even greater. The scientific study of alkaloids may be said to have begun with the isolation of morphine by SERTURNER in 1804. Since that time they have remained of great interest to chemists, and now in any month there appear dozens of publications dealing with the isolation of new alkaloids or the determination of the structures of previously known ones. The area of alkaloid biochemistry, in comparison, has received little attention, and today is much less developed. There is a certain amount of personal arbitrariness in defining "biochemistry", as there is in defining "alkaloid", and this arbitrariness is doubtless compounded by the combination. Nevertheless, it seems to me that in any consideration of the bio­ chemistry of a group of compounds three aspects are always worthy of attention­ pathways of biosynthesis, function or activity, and pathways of degradation. For the alkaloids, treatment of these three aspects is necessarily lopsided. Much has been learned about routes of biosynthesis, but information on the other aspects is very scanty. It would be possible to enter into some speculation regarding the biosyn­ thesis of all the more than 1,000 known alkaloids.