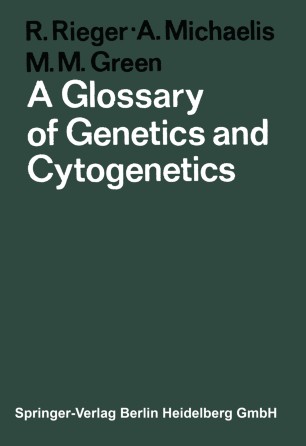 A Glossary of Genetics and Cytogenetics

The past two decades have witnessed a truly phenomenal growth and expansion in our knowledge of the principles and mechanisms of in­ heritance. :\iolecular and microbial genetics, for all purposes non-existent at the outset of this period, have developed and flourished to the extent of becoming major branches of genetics from which the most exciting and edifying concepts of gene function and structure have been derived. Similarly, man, heretofore a genetic curiosity, has become in his own right a genetic organism of first rank importance. It is, therefore, not without reason that accompanying the rapid proliferation of genetic knowledge, a parallel increase has occurred in the technical nomen­ clature and terminology special to the field of genetics and often special to specific branches of genetics. In preparing this glossary of ca. 2500 entries, we have attempted to compile and collate the terminology from seemingly unrelated, widely separated branches of genetics - classical and molecular; microbial and human; cytogenetics and population genetics. We have not been content merely to collect terms and definitions much as is found in a dictionary. Rather our aim has been to provide material suitable and usable both for students and research workers. Accordingly, depending upon our evaluation, some terms have simply been defined, others have been described at some length even to the extent of providing experi­ mental data.